Lithium is a strategic element linked directly to high technology and clean energy. It has been described as the new oil as it is a key component for batteries fuelling the electric vehicle revolution.

Lithium (chemical symbol: Li) is the lightest of all metals and the third element in the periodic table. The element lithium does not exist by itself in nature.

Lithium is very likely to remain a core component of batteries due to its key characteristics:

Utilising lithium for batteries has allowed electric vehicles and other weight-sensitive applications such as mobile electronics, power tools and drones to become ubiquitous.

Economically accessible sources of lithium are relatively rare and commercial production is currently sourced from two types of deposits:

The only operating lithium mine in the U.S. is Albemarle’s Silver Peak Mine, which is currently producing less than 4,000 tonnes p.a. of lithium carbonate production from brines.

With minimal lithium production currently in the U.S., Rhyolite Ridge is ideally placed to become a significant domestic producer of this critical mineral.

Importantly, it is likely to produce lithium at a lower cost than the current brine and spodumene lithium mines.

The DFS projects Rhyolite Ridge to be a very low-cost lithium producer at U.S.$2,510/tonne of LCE (with boric acid credit) – placing it at the bottom of the industry cost curve.

The global lithium market is expanding rapidly due to an increase in the use of lithium-ion batteries for electric vehicle and energy storage applications. In recent years, the compound annual growth rate of lithium for battery applications was over 22% and is projected by Roskill to be more than 20% per year to 2028.

According to analyst Benchmark, the demand for electric vehicles is expected to push demand for lithium-ion batteries above 400 GWh by 2025. In China, the government is pushing for all-electric battery cars and plug-in hybrids to account for at least 20% of its vehicle sales by 2025, and Benchmark predicts that electric vehicles will reach 10% of total sales globally by 2025. China already produces 55% of lithium-ion batteries globally, and its share is forecast to grow to 65%, according to Bloomberg.

The graph below from Roskill shows the forecast for electric vehicle sales to escalate to over 25 million units by 2028, with China dominating production. Benchmark has published similar figures. 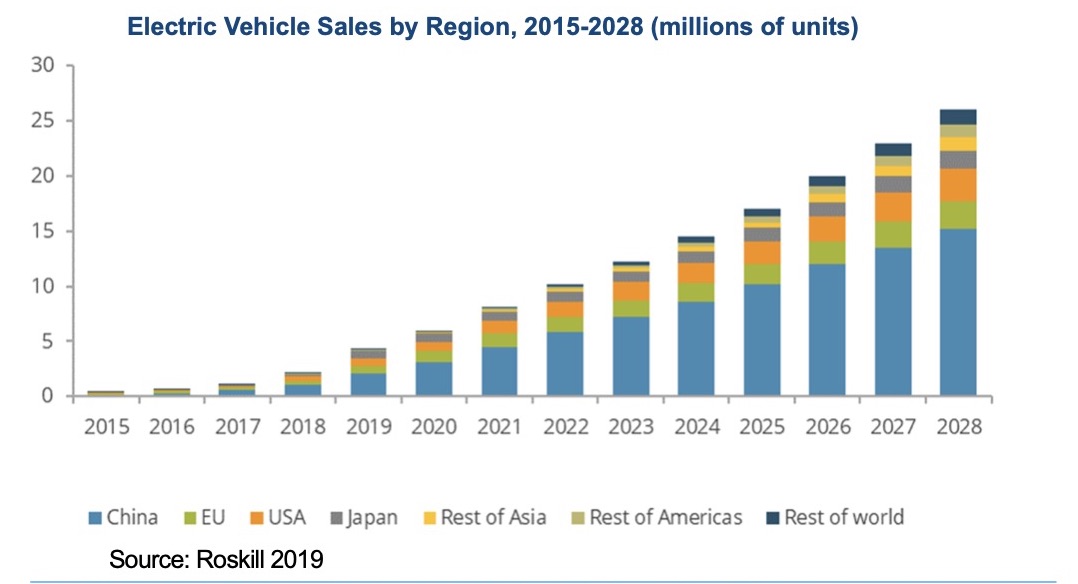 Countries with the largest lithium reserves worldwide include:

In the United States, there is a single, small lithium mine operated by Albemarle at Silver Peak in Nevada.

In 2019, 45% of global lithium consumption was in ceramics, glass, polymers, and alloys; however, growth in the technology and energy sectors in recent years has seen consumption in lithium-ion batteries grow at over 20% per year.

In mid-2019, Roskill published its prediction for lithium supply and demand, as did Benchmark in late 2019. 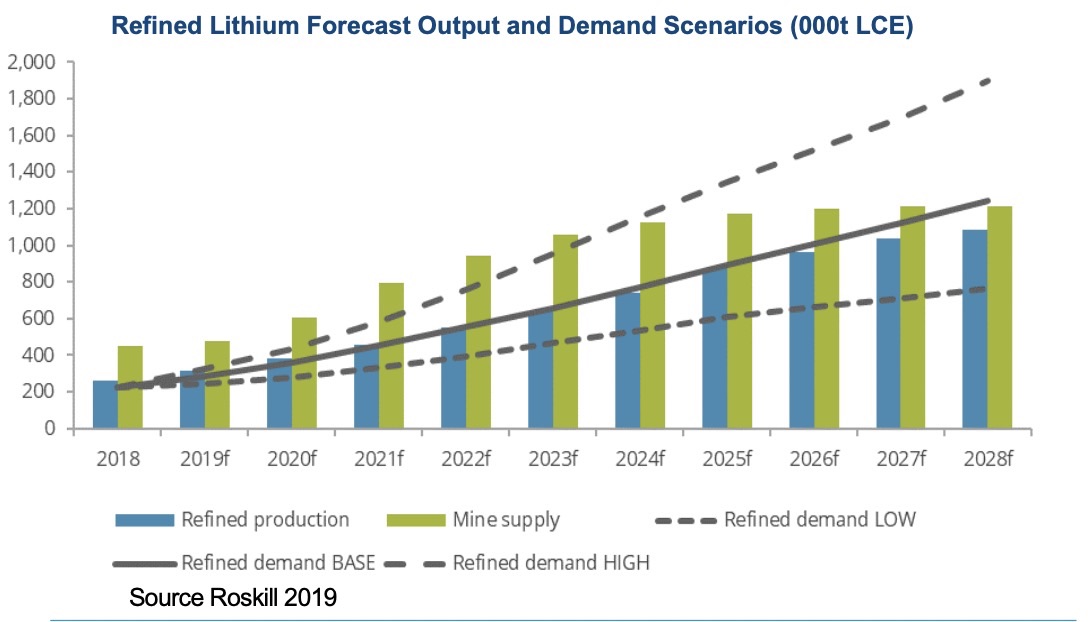 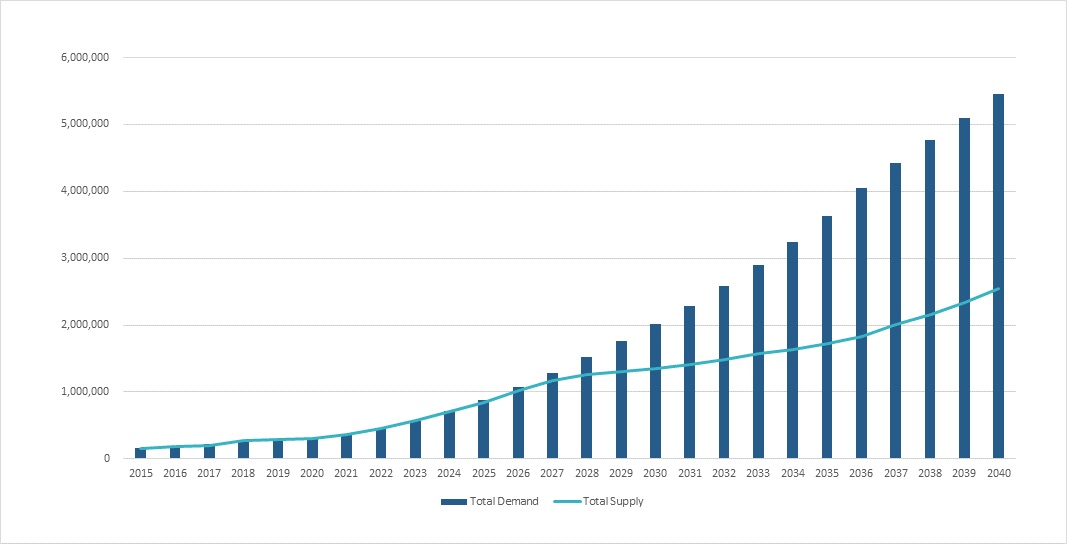 In the U.S. and Europe, there is large demand growth forecasted in key auto markets yet very little domestic supply is in the pipeline. Rhyolite Ridge will be a politically secure Western source of this critical raw material, ready to be sold directly into these global battery supply chains.

Boron is an important industrial mineral that is only produced in a few locations globally but plays an important role in the modern world. It is one of the most versatile elements in the world, used in everything from computer screens to fertilisers to creating powerful magnets for wind turbines.

Boron (chemical symbol B) is a rare light metal and the fifth element in the periodic table. The element boron does not exist by itself in nature. Rather, boron combines with oxygen and other elements to form boric acid, or inorganic salts called borates.

Borates are an important mineral group for modern society with demand expected to continue to grow at or above global GDP rates. There are few substitutes for borates especially in high-end applications and agriculture. These markets are expected to grow as global population grows and becomes more affluent.

Rhyolite Ridge will produce boric acid which is the primary feedstock chemical for industry.

Essential for our modern society, demand for boron is increasing and consumers are expected to welcome additional suppliers to reduce the risks associated with being dependent on the two dominant suppliers (Rio Tinto and Eti Maden).

For an interesting summary of boron, see the infographic on the Visual Capitalist website “Boron: Making Modern Life Possible“.

Boric acid is a critical raw material used in more than 100 specialist applications globally. The global distribution of boric acid use is shown in the chart below:

The distribution of boric acid applications is set out below: 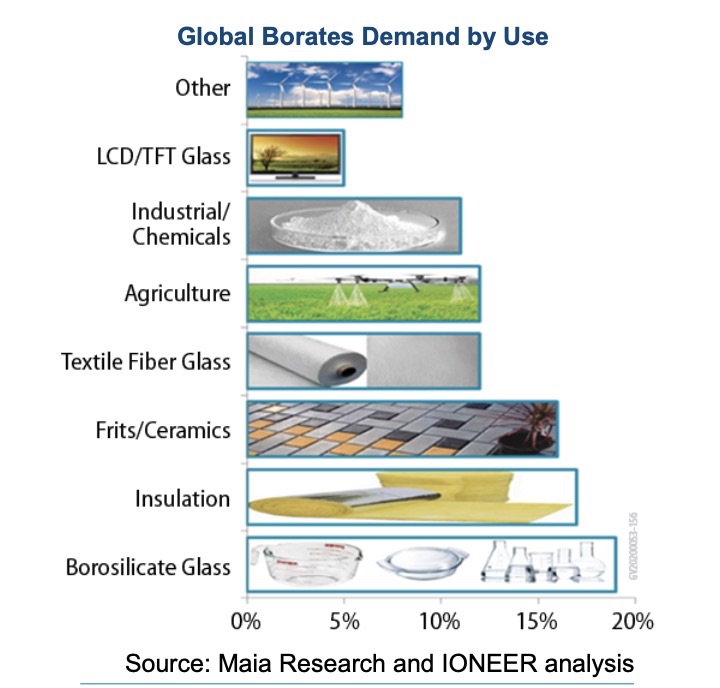 Global Borates Demand by Use

Borosilicate glass is the main end use due to its high chemical resistance and resistance to thermal shock. Other major uses include fiberglass, liquid crystal display panels (LCD used in televisions, computers, mobile phones, computer tablets, smart watches, etc.), domestic ovenware, and laboratory glassware. Some strategic end uses are use in permanent magnets for electric motors, specialty alloys, and ceramics including armour and armour plating.

Large-scale borate resources are very rare. There are only two major suppliers of borates and they currently have over 80% of total borate sales. One is in Turkey operated by a government company and the other in the Mojave Desert in California owned by Rio Tinto. Rio Tinto’s open cut mine was started in 1957 after pursuing underground operations for many years and the Reserves are diminishing.

There are no other major mines in the U.S. or elsewhere other than Turkey. Currently, there are no announcements of any large expansions of existing producers and no new large-scale mines have been announced. Rio Tinto does have an underground project in Jadar, Serbia but this project has been in the prefeasibility study stage since 2012. No recent announcements have been made on this project.

The global demand for boric acid has been consistently growing at more than 4% and is projected to continue at this growth rate to 2024. Based on the supply and demand modelling, it is believed that the market will start to tighten in 2021 at >85% utilization rate of installed capacity. This is due to maintenance shutdown requirements, non-scheduled breakdowns, inefficient global distribution of supply, and other inefficiencies.

Demand is expected to exceed supply by 2024 without ioneer boric acid supply. This supports the assumption that the market needs additional capacity.

China will continue to be the biggest market over the forecast period, growing the fastest of the four major end use regions (over 4% annually), after growing at 5.3% annually over the past 4 years. North America is the second biggest borates market.